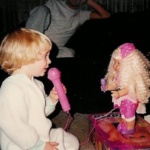 Audrey was born and raised in Chico, CA, where she discovered her love of all things dramatic early on. (The doll baby Audrey is singing to was “Starla”— and she was pivotal in this discovery.) With the help of her incredibly supportive family and friends, she pursued this passion throughout high school, and soon college at CSU Fullerton, ultimately earning her BFA in Musical Theatre: one of her proudest moments.

Some of her most inspiring roles include Jo March in Little Women, Louisa in The Fantasticks, “By My Side” Ensemble Member in Godspell, and Adele Rice in A Man of No Importance.  It’s roles like these that remind her why she does what she does. They are people that change her from the inside out, and have a message to share of their own.

(Music Director) Corey is an LA Drama Critics Circle award winner and LA Weekly Award nominee for GPTCo’s A Man of No Importance. A sought-after musical director and pianist in Southern California, this is Corey’s 16th musical production collaboration with Janet Miller. A graduate of The Juilliard School (BM Composition) and the University of Southern California (Adv. Cert. Scoring for Film and TV), Corey is a commissioned composer/arranger, assistant conductor for the Pageant of the Masters in Laguna Beach, Adjunct Professor of Voice for the Theater and Dance program at CSUF, and Music Director and Vocal Coach for Disney. Recent MD credits include The Addams Family and The Full Monty (3D Theatricals), and The Pajama Game (Musical Theatre Guild).

Kate has stage managed on 3 continents and performed all manner of stagecraft wizardry across the United States. Educated at Northwestern University and California State University, Fullerton, she currently resides in Southern California where she has served as stage manager for many local theater companies.

Kate tours internationally as stage manager with Wiesenthal. She is the Production Manager for the Whittier Center Theatre. Her favorite lighting designs include A Man of No Importance, The Fantasticks, Seussical- the Musical, Man of La Mancha, The Tempest, and The Nutcracker.

(Board President, Company Principal as Marketing Director) Kimberly started her marketing career in the arts, first working at the Segerstrom Center for the Arts in Costa Mesa before its opening season in 1986, and later serving as Director for a summer music festival in San Diego County. When the arts hit hard times economically in the late 1980s, Kimberly migrated her marketing skills to Silicon Valley, eventually founding a technology marketing firm which she and her three partners grew to 90-person consultancy. She sold her stake in that business and, after a few left turns, ended up back in arts marketing. Kimberly has a BA in Music from Duke University, an MA in Music from CSULB, and she played the lead in Annie Get Your Gun her senior year in high school.

Janet is the 2016 recipient of the LADCC Joel Hirschhorn Award for Career Achievement in Musical Theater. Her original choreography was showcased Off-Broadway in The Marvelous Wonderettes, for which she received a Lucille Lortel Award nomination. TMW has garnered Janet numerous accolades, and she was fortunate to choreograph the European Premiere of Wonderettes in Milan, Italy. GPTCo is celebrating their four-year anniversary at HFF! Under Janet’s direction, Good People has six productions under their belt—A Man of No Importance, Barrymore (2x) The Fantasticks, Closer Than Ever, and Marry Me A Little. The shows have been well received by both critics and spectators, garnering wonderful notices, as well as inclusion in year-end roundups, award nominations and wins, with Barrymore receiving an Ovation nomination for Best Actor. In 2015, the Los Angeles Drama Critics Circle awarded Janet the Joel Hirschhorn Award for a career of “outstanding contributions to musical theater.” Janet holds a B.A. in musical theatre-CSUN, an M.A. in theatre-CSULA and, Dec. 2016, an M.F.A in TVFT-CSULA. Ms. Miller is a proud member of SDC.